Southern Africa must embrace informality in its towns and cities

Informal settlements are growing fast in the region, and governments should aim for sustainable ‘less-regulated’ urbanisation.

Population growth and urbanisation are transforming cities across Southern Africa, but unlike in many other parts of the world, the urban transition here isn’t paying off.

Informal settlements, where people live on unproclaimed land with poor security, little or no access to urban services, and inadequate shelters, will likely remain a feature of urban areas. Local action framed by progressive national policy is needed to guide sustainable ‘less-regulated’ urbanisation.

In the past two decades, cities and towns across Southern Africa have grown by 100 million people. Current estimates show that 179 million people live in urban spaces, totalling 47% of the region’s population.

Most countries can’t keep up with this growth, and urban infrastructure and services are under severe pressure. One of the most noticeable trends has been the region’s inability to accommodate this urban growth safely and sustainably, resulting in a massive housing challenge.

The region is unable to accommodate urban growth, resulting in a massive housing shortage

The United Nations Human Settlements Programme (UN-HABITAT and Cities Alliance) has long placed urbanisation and informality on world agendas. They urged countries to adopt urban policies to address growth and develop city strategies to upgrade slums. Southern African countries have responded well, and many have implemented national urban development plans. But these plans aren’t being adequately implemented at city level.

National and local governments have been slow to open up land for housing, creating a vacuum filled by unregistered land and informal or unapproved housing. Most states (except Botswana, Seychelles and Mauritius) have seen a dramatic rise in informal urban dwellers. UN-HABITAT’s Urban Indicators Database reveals that in 2000, 51 million people lived in informal dwellings in Southern Africa’s cities and towns. By 2018 the number had grown to 87 million.

Nearly 40% of this growth occurred in the Democratic Republic of the Congo. In its capital Kinshasa – one of the world’s fastest-growing megacities – current estimates are that three out of four people live in informal areas. And although South Africa has reduced the percentage of people in informal settlements by 7% since 2000, 1.4 million have been added.

In Angola, Madagascar and Tanzania, the share of people living in slums has declined by more than 20% since 2000. However, as in South Africa, population growth has been so immense that the absolute number living in shacks has continued to rise. Between these three countries, informality has grown by 8.6 million people (see graph). 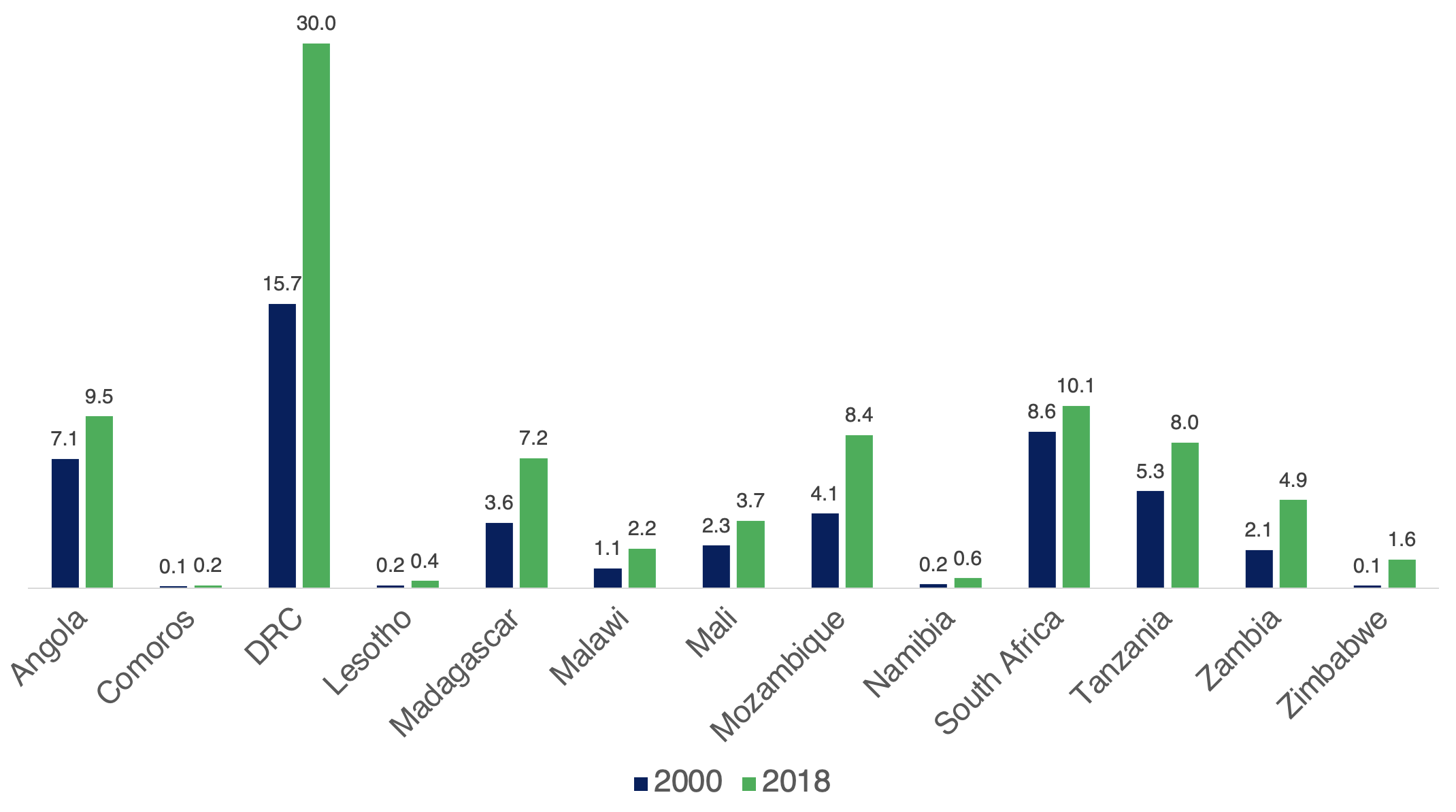 Forecasts show that the region will be home to 700 million people by mid-century. Towns and cities will accommodate 412 million, a staggering growth of 233 million urban dwellers.

This rapid expansion of cities in the context of jobless economic growth will make informality inseparable from the region’s future. An Institute for Security Studies report notes that this trend will likely accelerate as climate change and conflict pressures build, forcing more rural-urban migration.

The drivers behind this uptick in informality are complex but essentially entail a supply-demand mismatch. The supply of registered affordable, well-located land can’t keep pace with the growing demand. Releasing residential land that is parcelled, zoned and includes basic services is a long and costly process, often catering only to the middle and wealthy classes.

Planning, zoning and building regulations are still influenced by colonial systems where standards are high and beyond the reach of most urban dwellers. This relegates them to unapproved shelters often located in unsafe places and built with temporary materials. Residents are exposed to increasing risks of heat stress, fires and floods.

However, informal settlements can be vibrant and beneficial to those seeking to enter urban economies and offer short- to medium-term accommodation solutions. City authorities should develop positive, innovative responses to informal urban growth. National policies and legislation that recognise and improve life in informal settlements are also essential.

Rather than ignoring slums in urban land-use plans or pursuing idealistic notions of formalised perfection, informality should be recognised. Local and national governments must face the lived reality of urban migrants and incrementally address the massive challenges.

Valuable lessons can be learnt from cities such as Dar es Salaam in Tanzania and eThekwini in South Africa. Dar es Salaam has a long history of upgrading unplanned settlements in situ and infrastructure projects where communities manage essential systems and services.

Rather than pursuing idealistic notions of formalised perfection, informality should be recognised

eThekwini has developed progressive environmental policies alongside an informal prioritisation model. Regular assessments categorise informal settlements from precarious and in need of emergency responses to those that are more stable and could be regularised and upgraded, in situ, over time.

For most urban authorities, the challenge of informal settlement growth is overwhelming. The aspiration shouldn’t be some unattainable notion of city planning nor imported notions of individual, private land title across the whole city. These make formal compliance unaffordable for most urban residents.

A recent City Alliance policy paper urges governments and town planners to recognise ‘the residents of informal areas as full and equal citizens, deserving of the same dignity, respect and opportunities afforded to all citizens in cities.’ It encourages ‘the inclusion of all informal areas in city planning processes and the generation of the necessary data to ensure effective planning.’

Southern Africa’s cities must accommodate rapid urban growth by planning, releasing and preparing safe land for residential and other development. This can allow for guided, less-regulated development rather than ignoring the challenge of informality. National and local governments have the power to achieve this, while the means to execute it lies in the hands of the private sector and civil society.

This article was first published by ISS Today.

Alize le Roux joined the ISS in May 2021 as a senior researcher in the African Futures and Innovation programme in Pretoria. Before joining the ISS, she worked as a principal geo-informatics researcher at the CSIR where she supported various local and national policy- and decision-makers with long-term planning support. Alize has 14 years’ experience in spatial data analysis, disaster risk reduction and urban and regional modelling. She has a master’s degree in geographical sciences from the University of Utrecht, specialising in multi-hazard risk assessments and spatial decision support systems.