The continent will probably miss the SDG poverty target, but the right policies could deliver significant reductions.

About 30 million more Africans fell into extreme poverty (living on less than US$1.90 a day) when COVID-19 broke out in 2020. Before the pandemic struck, over 445 million people – equivalent to 34% of Africa’s population – lived below the poverty line. Even then, this figure was almost nine times the average for the rest of the world.

In 2015 the United Nations adopted the Sustainable Development Goals (SDGs) as its blueprint for world peace and prosperity. At its core are 17 SDGs with 169 targets for poverty, health, education, inequality, economic growth and climate actions that member countries agreed to achieve by 2030.

As the halfway mark approaches, and with the pandemic worsening the situation, Africa isn’t likely to meet SDG 1 – to end poverty in all its forms for 97% of the population. Africa has the largest share of extreme poverty rates globally, with 23 of the world’s poorest 28 countries at extreme poverty rates above 30%.

Nigeria, Madagascar and Zambia had poverty levels comparable to China, Vietnam and Indonesia in the 1990s 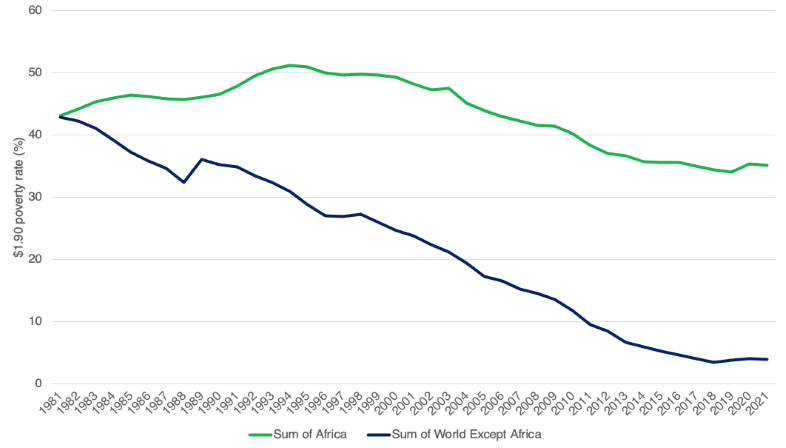 Nigeria, Lesotho, Madagascar and Zambia had poverty levels comparable to China, Vietnam and Indonesia in the 1990s. However, while the last three countries have drastically reduced extreme poverty, African countries haven’t.

Within Africa, most poverty is concentrated in the Sub-Saharan Africa region. Central Africa has the highest extreme poverty rate of 54.8%, followed by Southern Africa at 45.1%. Rates in Western and Eastern Africa are 36.8% and 33.8% respectively. North Africa met the SDG target of a poverty rate below 3% in 2019.

Others have performed well. Morocco, Algeria, Tunisia, Seychelles and Mauritius had extreme poverty rates below 1% in 2019. Egypt, Cabo Verde and Libya have also met the SDG target.

Africa’s inability to reduce its high extreme poverty rate has been attributed to numerous factors. One is the over-reliance on natural resources for growth instead of agricultural and rural development, which characterises 85% of Africans’ livelihoods. The higher initial poverty levels coupled with low asset ownership and restricted access to public services also make it difficult for households to take advantage of growth. Bad governance, corruption and high-income inequality also drive up poverty.

Although every country’s poverty rate will fall, trends will vary. Nine countries – Egypt, Cabo Verde, Gabon, Tunisia, Seychelles, Mauritius, Algeria, Morocco and Libya – will meet the SDG target by 2030. Conversely, 24 countries will still have more than 30% of their population living in extreme poverty.

By 2043 – when the second 10-year cycle of the African Union’s (AU) Agenda 2063 ends – Africa will still be struggling to meet the 2030 SDGs. By this time, the continent’s extremely poor people will constitute 17.8% of its population. Worryingly, seven African countries will still have extreme poverty rates above 30% by 2043.

Based on Current Path assumptions, Africa will fail to reach the SDG target for extreme poverty, even by 2043. To meet the target by 2030 will require that the rate of poverty reduction quadruples compared to 2013 and 2019, placing the goal out of reach.

However, with the right policy interventions and political backing, Africa could significantly reduce extreme poverty over the next two decades. An integrated approach is needed that tackles the demographic transition, corruption, bad governance, infrastructure shortage, lack of regional trade integration and poor quality of education. IFs modelling shows that such a combined approach (Combined Agenda 2063 scenario) reduces extreme poverty to 6.4% by 2043 (Chart 2). 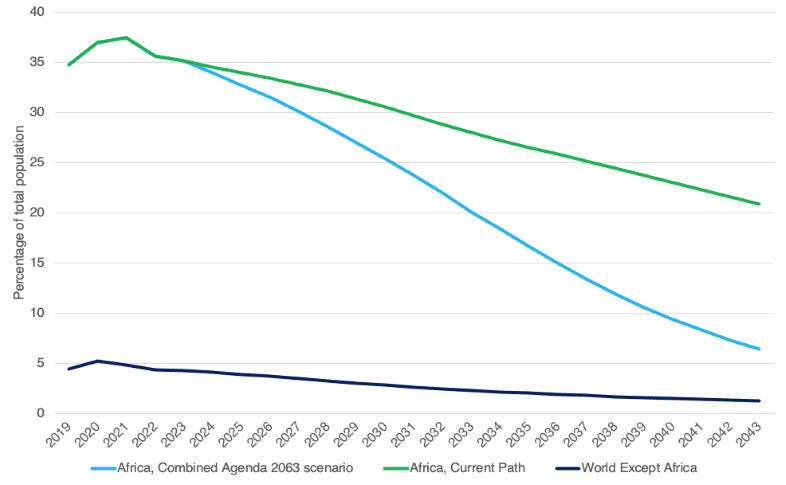 Although eliminating extreme poverty by 2030 is out of reach for most African countries, interventions in key sectors would make a significant difference by 2043. Unless African governments refocus their efforts on implementing the right policies, the continent will likely fail to realise its development potential by the time Agenda 2063 ends.

Enoch Randy Aikins joined the ISS in January 2022 as a Researcher in the African Futures and Innovation programme in Pretoria. He had been working for ISS as a research consultant since May 2021. Before that, Enoch was a research and programmes officer at the Institute for Democratic Governance in Accra. He also worked as a research assistant (economic division) with the Institute for Statistical Social and Economic Research at the University of Ghana. Enoch’s interests include African politics and governance, economic development, public sector reform and poverty and inequality. He has an MPhil in economics from the University of Ghana, Legon.

Du Toit McLachlan joined the ISS in February 2021 as an extern from the Auwal Socio-Economic Research Institute (ASRI) and is currently a consultant for the African Futures and Innovation programme in Pretoria. Du Toit holds an honour’s degree in international relations from the University of Pretoria.

Why the stories Africa tells itself are key to its future

Africa can achieve prosperity, but there are no quick fixes

Is the IMF making a comeback across Africa?