Failure to safeguard the sector against climate hazards will have far-reaching socio-economic ramifications.

Agriculture is a fundamental pillar of Malawi’s economy. It is the country's primary source of export earnings, and nearly a quarter of its GDP is derived from it. At face value, the sector is doing well. The country managed to increase yields per hectare from two metric tonnes in 1990 to eight metric tonnes per hectare in 2020, while production increased from five million metric tonnes to 29 over the same period.

Over time, crop-producing land expanded from 25% to 40% of the total land mass. Malawi currently boasts the highest agricultural yields per hectare among all 23 low-income countries in Africa.

This success can be attributed to significant investment in the sector and a government that has realised its socio-economic importance. The sector has been well guided by several successive and progressive development plans and policies, including the successful Farm Input Subsidy Program in 2005. This programme saw fertiliser consumption increase from 28 kg per hectare to 45 kg per hectare, improving average yields significantly. Malawi’s newest long-term development plan (MW2063) has also placed the sector and its transformation as one of the country’s three main pillars.

Nevertheless, amid gains and signs of progress, food insecurity continues to be at high levels, with ongoing humanitarian food assistance programmes required to stave off crises and emergencies. In August last year, the Integrated Food Security Phase Classification released a report that said 2.6 million Malawians (13% of the total population) were experiencing ‘crisis’ levels of food insecurity.

Given the extensive nature of subsistence farming nature of the country, locally based climate adaptation solutions should take precedence

The situation was expected to deteriorate such that by March 2023, 3.8 million Malawians (20% of the total population) would be classified under the acute (crisis) food insecurity level. This is a significant upward trend from the 720 000 classified in 2019 and the 1.7 million classified in 2020.

While humanitarian efforts have scaled up since November 2022 to avoid an ‘emergency’, it is anticipated that stress and crisis outcomes will persist in the southern districts. Much of the current crisis results from recurrent weather shocks in a region subjected to abject poverty and significant subsistence dependencies.

Ninety per cent of all agricultural land in Malawi is cultivated through rain-fed subsistence farming practices, with only 4% of farming land under irrigation. Subsistence farmers predominantly grow maize for domestic staple consumption on farms of less than one hectare in size, making the sector extremely vulnerable to rainfall variability.

Significant crop losses due to the erratic and severe rainfall in the previous harvest cycle have contributed to the current below-average food stocks and households having to rely on import markets to meet the shortfall. Late-onset rains and below-average rainfall this season will likely result in a further 10% reduction in total crop yields, forcing households with depleted food stocks to purchase staples from markets.

Households are met with extremely high food prices at these markets. Of particular concern is the price for maize, rice, and cassava, which has been climbing sharply due to the low harvest, high input costs (due to fuel prices), and inflation. The Famine Early Warning Systems Network has shown maize price increases ranging from 142% to 224% compared to the five-year average and price increases of 23% between October and November 2022.

This places severe pressure, in particular, on rural and poorer households. For instance, many communities in the southern districts, the country’s most deprived and poorest region, sustained severe crop losses last year after Cyclone Ana passed through the country. Low food stocks have forced these households to rely on the increasingly expensive markets for basic staples.

Successive seasons of below-average harvests have also hampered labour demand, and households that generally depend on income from agricultural labour have less to spend on staples, worsening these communities' already fragile socio-economic conditions.

The most recent droughts of the 2015/16 El Niño system required one of the most extensive emergency relief assistance programmes in the country's history, directly affecting 6.7 million people. The 2012 droughts resulted in widespread food shortages and affected 1.9 million Malawians, 2019 Cyclone Idai’s torrential rains affected 975 000 people, while Ana in 2022 directly impacted around 110 000 Malawians, with its aftermath still being felt across much of the southern districts.

The frequency and intensity of these weather disasters have also significantly increased over time. Since 2000, 42 weather-related disasters have occurred in Malawi, while in the preceding two decades recorded, only 12. The upward trend in recorded economic and agricultural losses can directly be attributed to a shifting climate, growing vulnerabilities within rural communities, and the slow adaptation of the sector to these extreme events.

For example, regular flooding causes farmers to be cut off from their markets and the lack of access to irrigation when droughts and erratic rainfall impact harvests and livelihoods harshly, resulting in below-average production. As the impacts of climate change unfold over the next couple of decades, this will undoubtedly be one of the greatest threats that this sector and the country will have to confront.

Malawi, as one of the world’s least developed countries, needs more resources to finance and implement climate adaptation measures. It was ranked 163rd on the Notre Dame Global Adaptation Initiative (ND-GAIN) Index in 2020. This index measures the level to which a country is both vulnerable to climate change and ready to improve resilience. Malawi's ranking has been declining since 2005 when it was ranked 147th in the world. The country is the 25th most vulnerable globally to climate change but ranks only 160th for readiness. 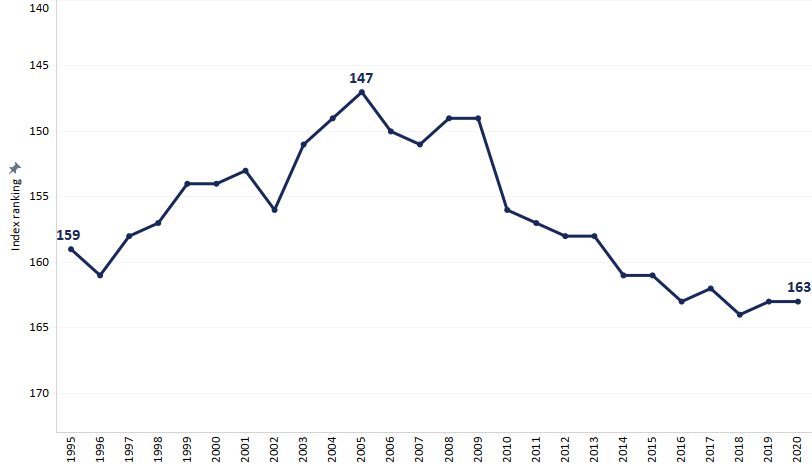 The country has set several climate-related targets for addressing these challenges in its first 10-year implementation plan (MIP-1) of the MW2063, but these fall short of what is required to weather the storm. For instance, the MW2063 sets a target of only 40% in 2023 for mainstreaming climate change readiness into policies and plans, yet the urgent nature of the threat requires much quicker and more decisive action.

Adaptation finance should also be mobilised for investment in climate-resilient infrastructure and climate-smart agricultural practices. Given the large-scale subsistence farming nature of the country, locally-based climate adaptation solutions should take precedence. This would require significant improvements to the agricultural subsidy programme, which currently does not benefit poor households. Capacity should be built among all actors in this space to source, secure, and apply these finances in line with climate-smart practices.

Additional climate resilience in the sector can also be achieved through adopting an ecosystem-based approach that focuses on ecosystem restoration and protection to protect rural communities against floods and other negative impacts of climate change and land degradation. These could include, for example, forest protection, wetland restoration, catchment, and soil rehabilitation. Nature-based solutions such as catchment rehabilitation have proven effective in preventing flood damage by minimising run-off in periods of excessive rainfall.

Research by the ISS African Futures and Innovation team shows that agricultural development is the low-hanging fruit that would boost the population's well-being in the short to medium term. However, this potential will only be realised if Malawi adequately protects itself from climate-related threats.

Effective climate adaptation interventions and policies can safeguard harvests and increase productivity, raising the incomes of farming households, lowering food costs for non-farm populations, and paving the way for agro-industry development. Failure to implement mainstream climate adaptation in the sector will result in ongoing and worsening food insecurity.

Alize le Roux joined the ISS in May 2021 as a senior researcher in the African Futures and Innovation programme in Pretoria. Before joining the ISS, she worked as a principal geo-informatics researcher at the CSIR where she supported various local and national policy- and decision-makers with long-term planning support. Alize has 14 years’ experience in spatial data analysis, disaster risk reduction and urban and regional modelling. She has a master’s degree in geographical sciences from the University of Utrecht, specialising in multi-hazard risk assessments and spatial decision support systems.

Kouassi Yeboua joined the ISS in May 2020 as a research consultant and is currently a researcher in the African Futures and Innovation programme in Pretoria. Before joining the ISS, he was foreign trade manager at Sarina Glass in Istanbul. Kouassi has published on various issues relating to foreign direct investment in Africa and is interested in macroeconomics, international trade and ﬁnance, and econometric modelling. He has a PhD in economics from Marmara University.