With the right set of policy interventions, Uganda can advance in human and economic development by 2040.

Although its journey has been marred by military coups, political instability and unstable regimes since the abrogation of the 1962 Constitution, Uganda is considered an electoral democracy.

The country is endowed with abundant natural resources. With this and the discovery of oil reserves in 2006, and subsequent investment by TotalEnergies and the China National Offshore Oil Corporation, there is significant potential to boost development.

To attain sustainable growth and development, the government has pursued successive long-term economic plans since independence.

During the first 10 years of independence (1962-1971) Uganda developed two medium-term plans that were interrupted by the Economic War Plan in the 1970s. In the 1980s the World Bank pioneered the Structural Adjustment Program and later the Economic Recovery Program in 1987. Between 1997 and 2008, the long-term planning framework for the government was the Poverty Eradication Action Plan.

In 1997, Vision 2025 was developed (‘Prosperous people, harmonious nation, beautiful country’), followed by a draft Vision 2035 in 2007, which served as the county’s long-term development perspective plans.

However, neither was operationalised, owing to the lack of appropriate institutional framework, legal and policy matters. The Comprehensive National Development Planning Framework (CNDPF) was approved in 2007. It laid the foundation for a 30-year development plan that would have three 10-year implementation plans, six national development plans, local government plans, annual work plans, and budgets.

The CNDPF is the latest attempt to unlock sustained development in the country. It lays the groundwork for Vision 2040, which encapsulates Uganda’s current national development targets. Vision 2040’s tagline is ‘A transformed Ugandan society from a peasant to a modern and prosperous country within 30 years’. It aims to achieve upper middle-income status and a GDP per capita target of US$9 500 by 2040.

The country is now implementing its third five-year National Development Plan (NDP III). This aims to increase household incomes and improve the quality of life of Ugandans through resource-led industrialisation that boosts value addition in the key growth opportunity areas of agriculture, tourism and minerals.

NDP III follows the successes of the previous NDP I and II such as sustained peace, security and macroeconomic stability, more than doubling GDP between 2010 and 2019, and increased per capita GDP of US$70, despite large population growth. Furthermore, Uganda has seen a tripling of domestic revenue collection between 2010 and 2019, while electricity access, paved roads, remittances and exports have also improved.

Similarly, the social sectors of education and health registered significant improvement during NDP I and II implementation, seen by the increased enrolment in business, technical and vocational training from 25 262 to 129 000 learners between 2008 and 2017, and increased access and use of health services.

Despite this progress, key challenges remain. These include a large subsistence economy estimated at 69% of households, rapid population growth and an associated large youth bulge at 78% of the population. This is coupled with a mismatch between skills required for labour markets and knowledge produced by training institutions.

Uganda is endowed with abundant natural resources and oil reserves

Uganda struggles with high electricity costs, limited access to and the high cost of capital, wide regional disparities in poverty, low capacity and high prevalence of corruption, low educational quality, and an increase in non-communicable diseases. The World Bank recognised a less supportive external environment, reduced momentum for reforms, exogenous shocks such as drought, and a debt-financed public spending that crowds out the private sectors as key challenges to the Ugandan economy.

The war in Ukraine has affected Uganda, just like many African economies, through rising commodity and food prices and higher fertiliser costs. As a result, real GDP growth is projected at 4.4% – which is below the recovery path of 4.7 in 2022.

To help attain the development aspirations contained in Vision 2040 and the African Union’s Agenda 2063, Uganda needs significant intervention in key areas for long-term development. This is detailed in a forthcoming report by the African Futures and Innovation team at the Institute for Security Studies.

The report presents Uganda’s likely Current Path forecast as it unfolds to 2040, towards the end of the third 10-year implementation of Agenda 2063, and the impact of eight sectoral scenarios using the International Futures forecasting platform.

The sectoral scenarios each present a single positive scenario for potential improvements in demographics and health, agriculture, education, manufacturing and transfers, leapfrogging and infrastructure, free trade, financial flows, and better governance and stability. The forecasting platform also estimates the impact of the scenarios on carbon emissions.

If Uganda continues to do business as usual (Current Path forecast), it will get to a potential demographic dividend only during the second half of the century. However, by implementing intervention in the Demographic and Health scenario, the country can accelerate its demographic transition and get to a potential demographic dividend by 2040. It can improve average life expectancy by an additional two years above the Current Path forecast by 2040. 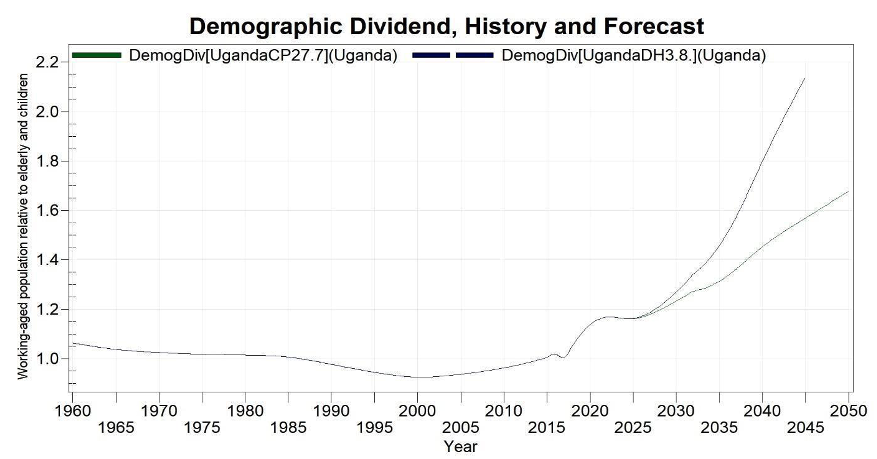 The Free Trade scenario will reduce Uganda’s trade deficit by almost seven percentage points below the Current Path forecast by 2040. In the Financial Flows scenario, Uganda succeeds in attracting more foreign direct investment, foreign aid and remittances. On the Current Path forecast, Uganda is projected to improve its effectiveness score to 2.3 by 2040, and further to 2.8 by 2040 in the Governance and Stability scenario, reflecting the impact that better security, capacity and inclusion will have.

The Infrastructure and Leapfrogging scenario, followed by the Manufacturing and then the Demographic and Health scenario, have the greatest potential to reduce poverty in Uganda by 2040. Infrastructure development reduces transaction costs and increases productivity and growth in economic sectors, which reduces poverty.

Similarly, Uganda can reduce poverty by pursuing a low-end manufacturing growth path and rolling out modern contraceptive use given its very high fertility rates. However, such a growth path will need to be accompanied by increases in welfare transfers to reduce consumption inequality. The effect of all eight scenarios in the Combined Agenda 2063 scenario has the potential to take 11 million Ugandans out of poverty and reduce poverty (US $1.90 poverty line) by 14 percentage points by 2040.

The implementation of the eight sectoral interventions can raise Uganda’s GDP capita to US$6 925, although still below the Vision 2040 target of US$9 500 by 2040. However, under the Combined scenario, Uganda will attain a GDP per capita of US$9 568 by 2045. However, the effect of the Combined scenario is to increase carbon emission to 26 million tonnes by 2040, representing a 30% increase above the Current Path forecast.

With the right set of policy interventions, Uganda can advance in human and economic development by 2040.

Mustapha Jobarteh joined the ISS in January 2022 as a Senior Researcher in the African Futures and Innovation programme in Pretoria. Before joining ISS, Mustapha was a senior lecturer and Head of the Department of Economics and Finance at the University of the Gambia and a research fellow with the Center for Policy, Research and Strategic Studies. His interests include macroeconomics, international trade and econometric modelling. Mustapha has a PhD in economics from Istanbul Medeniyet
University, Istanbul, Turkey.

Is the IMF making a comeback across Africa?